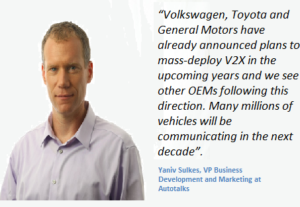 Automotive OEM’s are investing heavily in developing autonomous cars and it’s of no surprise that millions of vehicle will be communicating in coming years. V2X technology not only makes driving better but safe, convenient and time saving. Autotalks revolutionary global V2X solution, that’s capable of supporting both DSRC and cellular’s C-V2X, has become the perfect choice for OEM’s. Electronics Media interviewed Yaniv Sulkes, VP Business Development and Marketing at Autotalks and discussed V2X technology, world’s first global V2X solution, its deployment and many more.

What is the main focus of V2X technology, is it Road Safety only?

Yaniv Sulkes: Road safety can be significantly improved with V2X, and improved mobility is also a direct result of this technology.  Vehicles will be coordinating their maneuvers as they synchronize to avoid traffic jams or to drive through a green wave. V2X also provides real-time accurate data of vehicle status for accurate future movement prediction, and intention, such as turn lights.  This way traffic flows much better, resulting in less time in traffic for everyone. In autonomous vehicles, V2X complements the information coming from other sensors, as it is the only available sensor in non-line-of-sight scenarios and works in rough weather and poor lighting conditions.

Yaniv Sulkes: As V2X diverged into two different standards, DSRC and C-V2X, with fundamentally different architectures, we at Autotalks decided to resolve the issue of the two competing V2X standards and design one global solution. By equipping our mass-market ready 2nd generation, automotive qualified chipsets with C-V2X support, in addition to their native support of DSRC, Autotalks created the world’s first dual mode chipset. With Autotalks’ Global V2X solution, OEMs no longer need to choose one technology – they can now have both DSRC and C-V2X. Autotalks global V2X chipset is automotive qualified and is equipped with production grade software.

With its Global V2X solution, Autotalks delivers dual-mode (DSRC or C-V2X) functionality on its existing automotive qualified AEC-Q100 grade 2 chipsets while leveraging production grade software and maintaining the present API. This allows for the shortest time to market for a V2X solution that supports both DSRC and C-V2X. Autotalks global V2X solution does not need a cellular connect to work. There are many clear advantages to the separation from the cellular network both to the OEM and the consumer.

With the split in V2X technology standards, what challenges Autotalks faced while developing a unified solution?

Yaniv Sulkes: Leveraging on our software defined radio (SDR) and V2X capabilities, designing the unified solution was relatively rapid and effective. While the properties of a C-V2X modem differ from DSRC, there is significant reuse of the RF side, our truly secure architecture and leveraging our production software. As a result, we achieved a working unified solution over our production-ready chipset in a short time to market.

After launching global V2X solution, what is your intake on conflict between established DSRC and relatively new C-V2X.

Yaniv Sulkes: Autotalks is a V2X company, and our mission is to bring V2X to mass market in the best and fastest way possible. DSRC is a mature technology which enables mass V2X deployment today. C-V2X is an evolving technology which will enable future deployments. We expect them to be deployed in different geographies (a single standard per region) for similar V2X safety use-cases. As a leader in the V2X market we will support both V2X standards, we have designed a global solution to enable OEMs and Tiers to develop and deploy a single global V2X platform which can serve all vertical markets (light vehicles, motorcycles, trucks, autonomous vehicles, infrastructure) in all geographies.

Yaniv Sulkes: Volkswagen, Toyota and General Motors have already announced plans to mass-deploy V2X in the upcoming years and we see other OEMs following this direction. Many millions of vehicles will be communicating in the next decade. Other transportation verticals will join them such as trucks, motorcycles, autonomous vehicles as well as many massive infrastructure projects which are budgeted worldwide (e.g. C-ROADS in the EU). We anticipate major deployments in US, Europe and China which will grow over time, including aftermarket solutions. Technology evolution will also contribute to enabling more advanced future use-cases with V2X: IEEE 802.11NGV is working to define the next generation of DSRC while 3GPP is working on rel 16 and beyond for C-V2X. These advanced use-cases will include adding vulnerable road users such as motorcyclists, cyclists and pedestrians to the C-ITS conversation, coordinated maneuvering, enabling cooperative perception (sensor sharing) for vehicles and more. Regulation obviously plays a role and we see positive support from policy makers for V2X in the US, Europe and China. 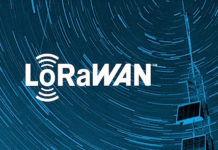 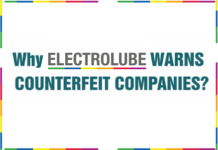 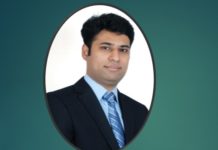 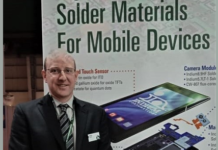 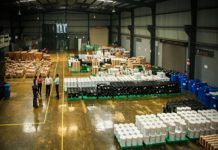 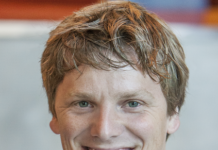