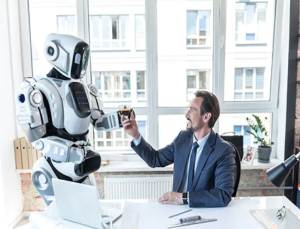 The Blog throws light on the future of smart industry with the emergence of Industry 5.0. It opens the new world where collaboration between robots and people are perfectly synchronized. Industry 4.0 to Industry 5.0, it’s not just a shift of name but the evolution where humans and cobots together create smarter and more efficient factories of the future.

Technology never stands still—and that’s as true in the cutting-edge world of manufacturing as it is in any other sector. Take Industry 4.0. Just as we’ve got our heads around the concept of creating highly automated factory environments—where technologies such as sensors, data processing, connectivity, and cloud computing combine to deliver business benefit—along comes Industry 5.0, a new paradigm that reintroduces humans to the loop. Industry 5.0 promises a tantalizing new world where robots and people collaborate in ways once believed to be impossible, enabling the implementation of new concepts such as mass customization. So, what’s really going on? Is Industry 5.0 going to change the way we design and build the smarter products of the future?

First, let’s take a step back by looking at how Industry 4.0 has transformed manufacturing across a multitude of sectors. The starting point for much of this shift has been the emergence of the Internet of Things (IoT), based on significant advances in sensor technology, which has led to smaller, cheaper, and better-performing sensors. Using improved performance, these sensors have been deployed across factory floors, enabling the collection of data from a broader range of industrial equipment (Figure 1). Thanks to ubiquitous connectivity, this data can be quickly dispatched to the cloud, where it can be processed and analyzed, increasingly using technologies such as machine learning and artificial intelligence to deliver real-time insights. This IoT-enabled process is a central tenet of Industry 4.0—where the widespread use of automation and the collection of data can provide real business benefit.

This brings up an issue: Such highly automated environments only work well up to a point. For example, the use of robotics in manufacturing can deliver tremendous levels of consistency and repeatability, performing a range of repetitive functions as part of a pre-defined set of production processes. That’s fine if you want products to look and feel largely the same. What if there is a desire for embellishment or personalization of the product being manufactured? This is increasingly likely in a world where consumer expectations are becoming more sophisticated.

That’s where Industry 5.0 comes in. Under this new paradigm, humans are reintroduced to the loop, increasing their collaboration with intelligent machines—to the extent of working side by side on the factory floor. Industry 5.0 could deliver the best of both worlds, with the accepted benefits of robotics merged with the advanced cognitive capabilities of humans in areas such as critical thinking. In this more multifaceted environment, production lines can become even smarter, with humans being able to oversee much higher levels of product customization. That’s an exciting thought in areas as diverse as automotive, consumer electronics, and jewelry—or even for products such as craft beer, where added touches to labeling can result in higher consumer appeal.

How to Deliver Industry 5.0

So that’s the concept, but what about the reality? How can Industry 5.0 be applied in definitive ways to improve the efficiency and versatility of the factories of the future? One of the most important considerations is the physical interface between humans and machines. Historically, robotic arms have been positioned behind safety cages, keeping humans out of harm’s way. But in the new world, there needs to be a much closer relationship—in both a literal and a figurative sense.

This will apparently be enabled by the development of a new generation of lightweight collaborative robots (cobots), featuring a suite of positional sensors that enable them to react to the presence of a worker in a split second. The introduction of these smaller, faster, and more flexible cobots is fundamental to the progression of Industry 5.0. Advanced safety characteristics will allow humans to take center stage in a broader range of production processes. This factor hasn’t gone unnoticed in the world of automation, with global industrial robotic manufacturers such as ABB, Fanuc, Siemens, and Kuka joining more specialized outfits such as Denmark’s Universal Robots in designing and launching new ranges of cobot products. According to a recent BIS Research study, the global market for cobots is expected to grow from $580 million in 2018 to $9 billion by 2024.

The Development of Collaborative Robots

With more players entering the market, the capability of cobots has rapidly accelerated. Early models were small in size, being designed to perform light assembly tasks alongside humans. These pioneering tabletop arms would typically weigh around 10 kilograms and have a payload of 3 kilograms. This kind of size and capability made them ideal for automated workbench activities.

Over time, though, cobots have become larger and more powerful, with the latest arms having up to five times the payload capability of their contemporaries. The increased size, and a more extensive range of grippers and tools in combination with more intuitive programming, has opened up a broader range of applications to include heavy machine tending, material handling, packaging, and simple workbench activities. These arms, which are installed with proximity, distance, and position sensors, can be used close to production-line employees (Figure 2).

As the performance of cobots has improved, the adoption of cobot arms has also increased in industrial environments. The automotive sector has been an early adopter. The PSA Group—whose brands include Peugeot, Citroën, Opel, and Vauxhall—use cobots for driving screws on its body-in-white assembly lines. In one such case, operatives pull a cobot into position to fix screws on both sides of vehicles as they move down the production line. Once finished, the cobot rotates and returns itself to a resting position, before it is used again for the next vehicle. PSA says this application has resulted in both cost savings and improved geometric tolerances.

Other carmakers have been equally proactive when it comes to using cobots inside their manufacturing plants. BMW has applied cobots to perform some aspects of the riveting process for crash-can assemblies, which have historically been carried out manually. The use of the cobots, fixing rivets into place as employees get on with other assembly tasks, has had a dramatic impact on cycle times, with takt times (average time between the start of production of one unit and the start of production of the next unit) falling from 64 seconds to 52 seconds.

Automotive suppliers are also getting in on the act, with component makers using cobots at the end of the line to perform critical inspection tasks. In the automotive industry, new applications are seemingly being found almost daily, with a recent report by Kenneth Research predicting shipment and sales revenue from cobots in automotive growing at around 43 percent or more annually by 2022.

In other sectors, cobots are being used for very different kinds of tasks. In the metals industry, for example, they are being applied to carry out a range of polishing and deburring activities, performing what has traditionally been a labor-intensive task. According to a report by automation specialist WiredWorkers, cobots have been shown to polish both flat and uneven surfaces in a consistent and repeatable manner, with the force control easy to program, and the ability to change setups for new products quickly. They are also increasingly used for the loading and unloading of Computer Numerical Control (CNC) machines, saving workers in the metal sector from having to perform what can be a physically demanding and sometimes dangerous task.

Even in the maker market, cobots are finding new roles. Additive manufacturing startups are beginning to use them to provide personalization of 3D-printed parts (Figure 3). Here, cobots can be used to help create different finishes and engravings—something that might prove popular in the creation of genuinely bespoke accessories for consumer electronic devices. Also, in the jewelry sector, artisans are looking at how cobots might be used to assist with the picking, placing, and embellishment of precious stones.

Cobots hold potential across a wide range of industries. But while the scope and extent of their use vary dramatically depending on the sector, one constant always has to be considered: The need for a cultural shift in attitudes toward automation. The history of automation has been based on fairly established parameters with robots mostly performing their roles behind fenced-off areas. In the brave new world of Industry 5.0, however, robots and humans must work as collaborators, rather than competitors, forging a relationship based on a total change of mindset.

That plays into the broader debate around what has been perceived to be a conflict between automation and the requirement for human input. The prevailing school of thought has always been that the march of machines would eventually translate into widespread job losses across industrial sectors. Industry 5.0 changes that debate, reintroducing humans to the mix in a way that sees them perform more value-added roles.

This is reflected in the findings of a World Economic Forum report, assessing the changing face of global skills requirement by 2022. As automation becomes more sophisticated and more widely used across key sectors, some traditional roles will undoubtedly die out. But these will inevitably be replaced by other emerging disciplines focused in areas such as big data analytics, artificial intelligence, software and applications, and digital transformation. All of these new roles fit neatly into the world of Industry 5.0, underpinning the more collaborative nature of the human/machine relationship. According to the report, this shift could result in 133 million new roles, while causing around 75 million job losses—suggesting that increased automation will, on the whole, deliver a net benefit.

On the Road to Smarter Production Systems

Technological progression within the industrial sector continues at a rapid pace. Industry 4.0 and Industry 5.0 might be attention-getting buzz phrases, but they do encapsulate a genuine change in the way that we design, build, and maintain products in highly automated environments. This shift will increasingly result in a more symbiotic relationship between machines and the human mind. It’s that intertwining of capability that holds the potential to create smarter and more efficient factories of the future.

The Blog is re-published from Mouser Electronics Blog section with the permission.