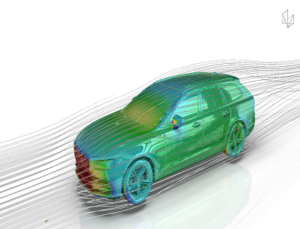 Hexagon has demonstrated how innovation can be accelerated by opening up the possibility of completing complex CFD (computational fluid dynamics) simulations that were previously too time consuming and expensive using the world’s fastest supercomputer, Fugaku. The company’s Manufacturing Intelligence division has shown that the performance of next-generation aircraft and electric vehicles can be explored in greater detail and with many more iterations using the power of simulation. By exploiting cutting-edge semiconductors, manufacturers can analyze all the complexities of reality with less than half the energy use and at a fraction of the cost of traditional simulation methods.

CFD simulations require significant computational power and resource. Consequently, engineers have to spend many hours simplifying a real product design just so that it can be simulated to make sure it will perform as needed. In some instances, 90% of an engineer’s time can be dedicated to this manual process, and engineers are increasingly being challenged to ‘scale-up’ simulations to manage more elements. As a result, the cost and time to achieve these simulations is prohibitive and engineers can only simulate an approximation of a product. Now, Hexagon’s Cradle CFD customers will have the opportunity to tap into the power of the ARM-based Fugaku computer architecture to achieve complex simulations quickly and easily. This is made possible through a new partnership which will allow customers to use Cradle CFD software on Fujitsu Limited’s commercially available Supercomputer PRIMEHPC series that utilizes the Fugaku technology.

Engineers will now be able to simulate complex designs without having to simplify them, not only saving time but also giving access to significantly enhanced detail. This in turn will enable them to explore multiple design options and do so quickly, using simulation more frequently to refine and test their designs and explore new concepts that cannot be explored with physical testing or simulation today. Manufacturers now stand to benefit from this increased speed and detail. Their engineers could also use this type of simulation routinely in their daily work, as the Fugaku architecture uses approximately a third of the energy of the computers they use currently, reducing cost and improving environmental sustainability.

This development is revolutionary for engineers in a number of sectors, including automotive, aerospace and construction, all of which need the insights provided by large scale CFD simulation. This is particularly valuable at a time when the automotive and aerospace industries are racing to bring new forms of mobility and new electrified transport to market. For example, automotive OEMs are under pressure to accelerate the transition to electric vehicles. By saving time on manual processes like meshing, manufacturers can run more simulations to better understand how the aerodynamics of a new model for impacts energy efficiency and range, and be able to iterate more between design and engineering and ultimately achieve the optimal design. Thermal management is also particularly important in electric vehicles, as managing the heat of a vehicle optimizes its performance, safety and longevity – all of which are major challenges for the EV market. Understanding these issues through higher resolution simulations enables engineers to achieve optimal designs and bring models with attractive design and range to market faster.

Hexagon experts collaborated closely with Fujitsu Limited to tune the Cradle CFD code to run on Fugaku and complete test simulations. A typical family car was simulated in its entirety, which is only possible with enhanced computational power. This model comprised 70 million elements using 960 cores and was simulated until steady state using the RANS equation over 1000 cycles.

In aerospace, the impact of turbulence that forms around the wings of an aircraft is of critical importance to how it is controlled and its safety. Turbulence is the result of many vortices, some of which are so small that they are not feasible to simulate using current methods. Using Cradle technology with Fugaku’s extra computational resource, engineers can now achieve a higher resolution simulation to enable them to better understand the impact of turbulence on the structural safety of the aircraft and the forces it can withstand. This is important for the development of the next generation of aircraft, including supersonic and hypersonic, for which engineers need to understand the behaviour of shockwaves around the aircraft.

The team successfully completed a test simulation of transonic compressible fluid around an aeroplane. Transonic analysis is essential to the design of safe and efficient aircraft, helping engineers understand what happens when the air flows around a wing control surface. The simulation:

This research was carried out by receiving the computational resources of the supercomputer Fugaku of RIKEN through the HPCI System Utilization Research Project (Issue No.: hp200209, hp200302).

Roger Assaker, President Design & Engineering, Hexagon’s Manufacturing Intelligence division, said: “Simulation holds the key to innovations in aerospace and eMobility. Advances such as the low-power Fugaku supercomputing architecture are one of the ways we can tap into these insights without costing the Earth, and I am delighted by what our Cradle CFD team and our partners have achieved.”

Masahide Fujisaki, Executive Director of Fujitsu Limited, said: “Fujitsu was pleased to have the chance to work with Software Cradle Co., Ltd. to tune and validate the performance of the scFLOW’s solver for large models on the supercomputer Fugaku and the Fujitsu Supercomputer PRIMEHPC series, which utilizes the technology of Fugaku. In the future, we look forward to working together with vendors to optimize commercial applications and contribute to the industrial use of Fugaku, while simultaneously offering the Fujitsu Supercomputer PRIMEHPC series to manufacturers and other companies so that the results of this work can be widely used in industry.”

Tomohiro Irie, Director of R&D for Cradle CFD, said: “By using the efficient computing power of Fugaku with our simulation tools, we will encourage users to simulate phenomena that simply weren’t feasible before due to the computation time and cost. Today we have simulated 192,000 elements but this is only the beginning – because Cradle CFD is used in diverse applications, I expect that these technical developments will contribute to making the power of Fugaku more accessible for general use, bringing huge freedom and improved insights to engineering teams solving tomorrow’s problems today.

“Both Cradle CFD and Fugaku are based in Japan, and I believe we can leverage these excellent achievements globally through Hexagon’s network.”