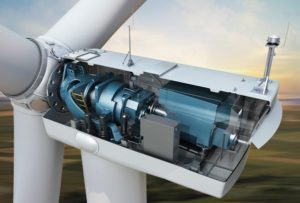 GE, announced an agreement with the Powering Australian Renewables Fund (PARF) to supply and install 123 wind turbines for the Coopers Gap wind farm project at Cooranga North, 250 kilometres north-west of Brisbane. PARF is a partnership between AGL Energy Limited (AGL) (20 percent) and Queensland Investment Corporation (QIC) (80 percent, on behalf of clients the Future Fund and the QIC Global Infrastructure Fund).

Upon completion in 2019, the 453 MW wind farm will produce approximately 1,510,000 MWh of renewable energy annually – enough to power the equivalent of more than 260,000 average Australian homes and reduce CO2 emissions by 1,180,000 tonnes each year.

Coopers Gap Wind Farm is a landmark project for GE. It will be the largest wind farm in the country on completion, and GE’s first wind project in Queensland. It is the second major renewables project that GE and AGL have announced this year, following the Silverton Wind Farm in western New South Wales.

“AGL’s commitment to a lower emissions future is clear. The company announced earlier this year it would ramp up investment in renewable energy and decarbonise its generation by 2050. This wind farm represents a significant step towards that goal and we are proud to be a part of that,” he said.

AGL Managing Director & CEO, Andy Vesey, said: “More than 800 MW of projects have now been vended into PARF in its first 12 months of operation, following the earlier transactions involving the Silverton wind farm project and Nyngan and Broken Hill solar plants in New South Wales. The strong support we have received from our equity partners and lenders for these projects is testament to the readiness of the private sector to invest in Australia’s energy transformation.

“Certainty on energy policy, including the implementation of the recommendations of the Finkel Review, will enable more projects of this kind to go ahead and help place downward pressure on energy prices by increasing supply,” he said.

The project is expected to create up to 200 jobs during the peak of construction, and an additional 20 ongoing operational jobs. The construction firm CATCON will be responsible for the wind farm’s construction.

Pete McCabe, President & CEO of GE Renewable Energy’s Onshore Wind business, said: “Australia is a great market for wind.  After the US, it is GE’s second largest region globally for renewable energy. While we see lots of opportunities in Australia, we need to continue to have policy certainty to drive investment.”

The Coopers Gap development is GE’s fifth wind farm project to begin construction in Australia in 2017. On completion in 2019, GE will be responsible for a fleet of wind turbines with a capacity of almost 1.4 GW.