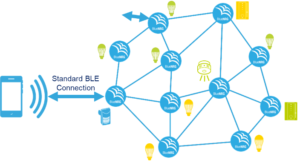 Bluetooth Low Energy (BLE) is the wireless communication technology available in every smart phone today. It has various advantages over other available communication technologies like low power consumption, security, versatility feature, makes it a good choice to connect with the smart devices. Extending one to one or one to many Bluetooth capabilities to many to many BLE mesh technology is bringing a big revolution in IoT ecosystem. Smart devices connected over BLE mesh network can be controlled to develop a smart home, smart office or smart industry.

To make smart devices part of the mesh network, security credentials and configuration information need to be provided to the smart devices. Generally, a smart phone is used to securely transfer this information to the devices. An advanced approach has been developed to provision a BLE Mesh network without using a smart phone. Same BLE interface used in the mesh nodes is used to provision the nodes to reduce the cost and removing the need of a smart phone. This helps in making the mesh network easy to use for those who are not familiar with smart phones like old age and blind people.

BLE-Mesh is an IoT (Internet of Things) application for connecting multiple BLE (Bluetooth Low Energy) devices in Mesh networking. It enables the Bluetooth enabled devices into a powerful, integrated, range-extending Mesh network with true two-way communication. Multiple devices can be controlled and monitored in a secure network very efficiently using this technology.

Provisioner is a node that is capable of adding a device into mesh network. It manages allocation of addresses to make sure no duplicate unicast addresses are allocated. Provisioner invite an unprovisioned device into a mesh network after it has been authenticated, converting the unprovisioned device into a mesh node. Provisioner is typically a smart phone or other smart computing device. Bringing the provisioning capability into an embedded board made the whole system autonomous, required minimal input from the user and enhanced security with reduced cost.

Provisioning is a process of installing the device into a network. It is a mandatory step to build a Bluetooth Low Energy Mesh network.

In the provisioning process, a provisioner securely distributes a network key and a unique address space for each device. Provisioning protocol uses P-256 Elliptic Curve Diffie-Hellman Key Exchange to create a temporary key to encrypt network key and other information. This provides security from a passive eavesdropper.

GATT bearer is provided to enable devices that are not capable of supporting the advertising bearer to participate in a mesh network like mobile phone. The GATT bearer uses the Proxy protocol to transmit and receive Proxy PDUs between two devices over a GATT connection.

Embedded provisioner is based on STMicroelectronics’s BLE Mesh solution called STSW-BNRG-Mesh. It has been developed to add devices in the mesh network, at which point they become nodes.

Provisioner invited the selected device to begin the provisioning process. After getting the provisioning capabilities from the device, Provisioner determined that it can provision the device. It send the selected supported security algorithm, availability of public key using an OOB technology, the ability for this device to output a value to the user, the ability for this device to allow a value to be input by the user, and if the device has a block of OOB data that can be used for authentication.

As public key was not available using an OOB technology, the public keys were exchanged between both devices.

Once the Public Key of the peer device is known, Both Provisioner and device used the calculated Diffie-Hellman shared secret ECDHSecret and generated a session key from that shared secret.

Provisioner didn’t reuse unicast addresses that have been allocated to a device and sent in a Provisioning Data PDU until the Provisioner receives an Unprovisioned Device beacon or Service Data for the Mesh Provisioning Service from that same device, identified using the Device UUID of the device.

In Embedded provisioner application, a state machine has been used to handle the different provisioning process states. It starts with scanning the BLE beacons state in which provisioner scans the unprovisioned device beacon, establishes link with the chosen device, performs provisioning procedure, assign address to device and save device information in the flash memory. This state machine work in cyclic manner to provision multiple unprovisioned devices in the range as shown in Fig 6.

After powering on the embedded provisioner node for the first time, It creates the network credentials including network key, application key, IV Index etc. required to send and receive data packets in mesh network.

A serial UART interface is available to interact with the provisioner node. After successful creation of network credentials, an informative message appears on the serial interface showing the node as provisioner node as shown in Fig 7.

In BLE Mesh, Unprovisioned device beacon is used by devices that are unprovisioned to allow them to be discovered by a Provisioner. Devices broadcast their own unique Device UUID for their identification.

After issuing the provisioning command, provisioner node establishes a link over PB-ADV provisioning bearer with the device identified by the Device UUID. Over this link, all required provisioning protocol messages has been sent using Provisioning PDUs.

Finally after getting the successful provisioning complete message from the device provisioner closes the established link as shown in Fig 9.

With the growing market of IoT devices, more and more devices are becoming part of the network for remote controlling and monitoring. With increasing number of smart devices in mesh network, Embedded provisioner is a good alternative which can help in saving both time and cost.

In a big mesh network with hundreds of devices, It is really a big challenge to do provisioning of all devices. Embedded provisioner can easily handle this problem by provisioning the nodes with the help of a small automation script.

Also It can be included in embedded systems like smart speakers, smart TVs to help them in creating the mesh network, provision and control the mesh nodes. Thus with the new developments more and more different types of devices can be added in the mesh networks with simplicity. 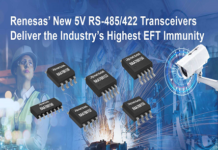 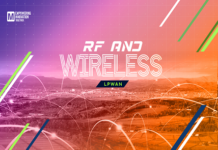 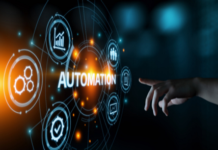 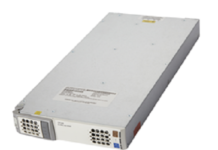 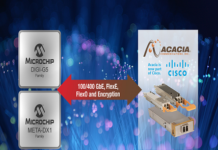 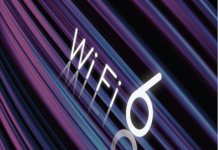